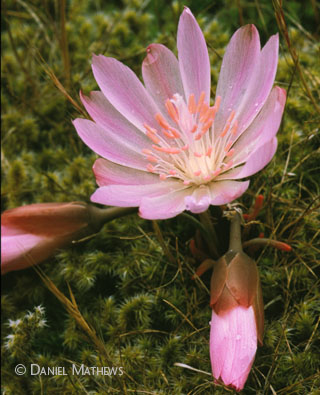 Petals and sepals all similarly pink, apricot, white, or mixtures thereof, ¾–1⅜” long [2–35 mm]; flowers very low to ground, one per stem in small clumps; 10–18 petals and 5–9 sepals; leaves basal, linear, initially fleshy (as shown in the lower photo) but usually withered by time of flow­ering.

Habitat: Arid gravels, mainly at lower elevations in the eastern Gorge; all but AB.

Natural History: It’s easy to see why this dramatic bloom is Montana’s State Flower and was a favorite of Meriwether Lewis. 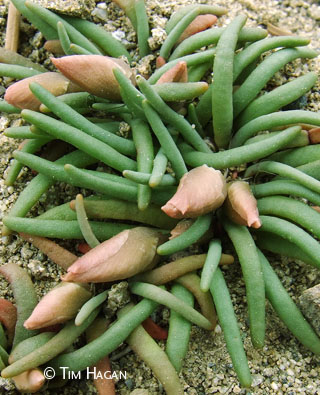 The Salish ­nation prized it above all other plant foods, rating a full basket a roots equal to a horse in barter value. They believed that they minimized its bitterness through several esoteric methods: digging bitterroot in spring when the leaves first appear; digging only from certain locales—especially the lower Bitterroot Valley—known to produce relatively mild roots; discarding the cores of the roots; or eating them after a year or two in storage. The root is small and the plant sparse so it took a few days to fill a bag, and it was never a staple of the diet. Each year when bitterroot was first dug, Salish and Kootenai bands held one of the year’s biggest feast events, the First Roots ceremony. Some people believed a particular part of the root could ward off bears.

Lewis tried some and wrote that they “had a very
bitter taste, which was naucious to my pallate, and I transfered them to the Indians who had ate them heartily.” On the return voyage he made a point, on reaching the river known for bitterroots, of collecting specimens for science. That sweet Montana river became “Bitterroot” along with the plant. Lewis called this river Clark’s River, but later geographers eventually settled on Bitterroot River and Valley and Mountains, based on the valley’s reputation as the best place to dig roots. “Clark Fork” now names the river the Bitterroot flows into.

One of Lewis’s dried roots got planted and watered several years after reaching Philadelphia. It sprouted green leaves and lived for some months. Privileged to name the plant for science, botanist Friedrich Pursh determined that it was not just a new species but a new genus, which he named for Lewis whose life by then had come to an early and bitter end. Pursh did not state whether by placing rediviva (“revived”) after Lewisia he was hinting wishfully at bringing Lewis himself metaphorically back to life. In the conventional view, rediviva refers simply to that undead dried specimen, reminding us that many botanical names were written while looking not at a glorious bloom reveling in its habitat, but at a pressed, desiccated relic in a dim herbarium far from home.

About seven percent of plant species, including cacti, Lewisia species, and many other succulents, have a nifty adaptation to drought. Plants have to open up their pores to take in carbon dioxide for photosynthesis, but they inevitably lose moisture through open pores. What if drought-adapted plants could avoid the heat of the day and just open their pores at night? Well, photosynthesis requires light, so they would have to take in CO2 at night and store it until morning. These plants store CO2 as maleic acid by night, and reconvert it for use daily. Their leaves may taste noticeably more acidic on summer nights, and sweeter during the day.